About those Dutch Game Awards 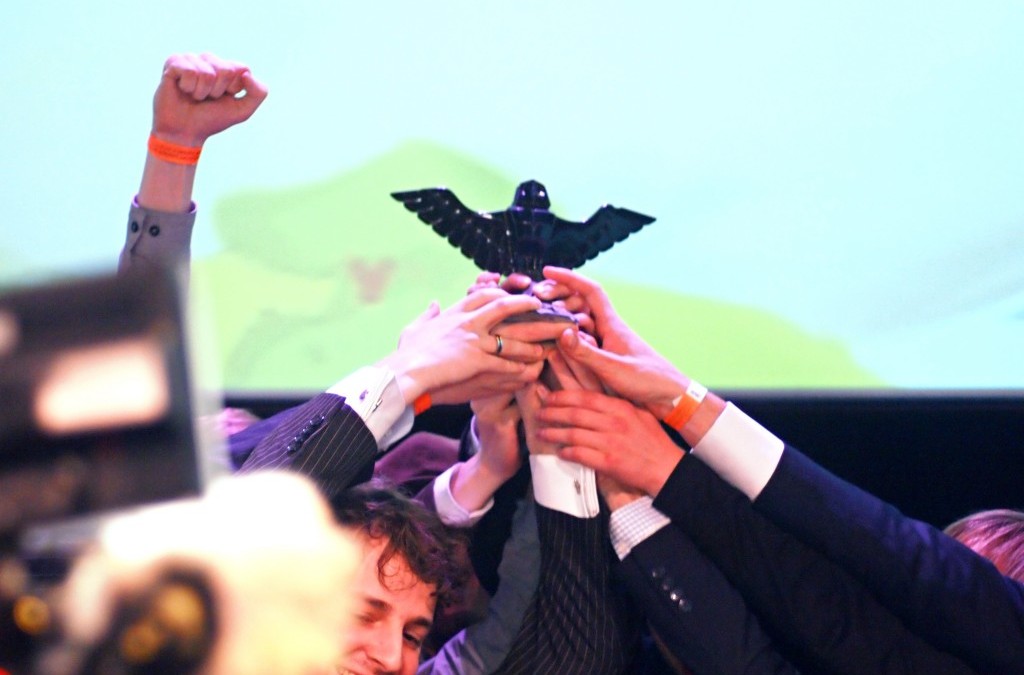 All awardshows are a bit dubious. When an industry thinks it needs an award and also finances it, it is to be seen whether the best entries will win: if it’s honest. Two days ago the nominations for the Dutch Game Awards 2015 were announced. It raised that question.

And the winner best shovelware is

For several years now the Utrecht-based Sticky Studios is getting nominated and this year is no different. And like in previous years, Sticky is taking part with two nominations.

For those who do not know: Sticky operates according to a strict and rather cynical method. For years they rapidly produce F2P games, based on a popular movie. The games typically use a borrowed casual design and low-quality artwork so Sticky can respond quickly to any upcoming movie hype. Thanks to an above-average number of downloads these games generate quite a bit of money through ads.

Presumably business success is the reason why they are so often nominated, any other reason is hard to imagine. Especially since leading critics (Pocketgamer) describe the nominated games with phrases like “Painfully obvious cash grab” (Maze Runner, best casual game), and “… a complete wreck that it’s almost impossible to enjoy playing.” (Interstellar, best technical achievement!).

Sticky probably won’t care about this; the level of ambition is simply rooted in the business model. I also do not mean to say that Sticky games should not exist. If someone has devised a trick to make a fast buck, then so be it. What amazes me however is that a national award crowns these games.

A point in their favour though; Sticky Studios does not seem to sponsor this award. You cannot say the same about other parties.

Because I am entering a minefield, first this: I can’t and won’t claim that there is a direct causal link between donations and outcome. I am also aware of the fact that organizing an industry award is almost impossible without help from the industry itself; that at it’s core it is already problematic.

The task of the organization is to maintain an honest, credible image within this framework. This will be a difficult balancing act, but certainly not impossible. How this balance is maintained by the organization of the Dutch Game Awards is something that is open for criticism.

First of all, the price of direct sponsorship, the so-called ‘patron-contribution’ is…hefty. For 795 euro a year someone can become a patron and with that support the award. This is such a large amount that – and this is evident in the patron list – larger studios and agencies participate. The Netherlands consists of many smaller developers, that might also like to become a patron. It would be better to lower the price so more studios can participate; creating an award supported by a broader base. One that is not dependent on the donations of a few big ones.

These patrons also seem to dominate the ceremony. Looking at the results of 2013 and 2014 shows that almost all winners had the patron-membership. When not the case, it often involved a game from students of a school that did have the patron-status (usually Utrecht School of Arts).

About Vlambeer and conditions

Another peculiarity: The awards are organized by Control, and they always take place during their Control Conference. Vlambeer is one of the leading sponsors of this conference, and are simultaneously nominated for ‘best entertainment game.’ This does not mean that they bought their nomination, but it does show a conflict of interest on part of the organizers.

What reinforces suspicion is that nominated patrons and partners do not have to abide by the conditions of entry. This year Grendel Games and Vlambeer – the ‘Leaders of the Dutch Game Awards’,  are nominated in major categories. Their games, however, Nuclear Throne and Oath of the Gryphon, would not be allowed to participate under the terms because entries must be released, or have a release between July 1, 2014 and July 1, 2015.

Nuclear Throne is still not officially released. The game is in Early Acces since October 2013, but using that date would make it too old to compete. Oath of the Gryphon’s also has not hit the (healthcare) market. Grendel’s website reports that the game is in development, and co-partner Groot Klimmendaal writes the same. In an email response from Groot Klimmendaal:

“Our therapists have indeed worked intensively on the development and uses of the game. The end result, we did not have at our disposal. We therefore do not use the game yet during rehabilitation treatment. “

This is not the first time. Underground (again Grendel, also patron) won on November 19, 2013 while the game was not available until April 2015.

I still do not claim that the Dutch Game Awards are corrupt as these are mere observations that prove nothing. I would however say that Control fails at the aforementioned balancing act and only magnifies the already problematic construction of an industry award. They nominate and reward shovelware, mostly award sponsors and patrons and their nominations clash with their own regulations. In addition, they increase the price of the patron-status (in 2013 it was 750, -), rather than make it cheaper and more accessible.Enough to conclude that Control and their Game Award shows no ambition to pursue prestige, credibility or relevance.

Juror Leonie Manshanden owns a marketing- and consultancy agency. Her clients include Gamious and GRIN. Both were nominated for awards in separate categories. After I shared this on Facebook, Control removed her name from the jury page. Luckily I have an archived link showing her name: https://archive.is/t5G69

Also in the cache

14-09-2015: Matthijs Dierckx (Owner of Control) writes he did not read the article and also that Leonie Manshanden is not and was never a jury member.

16-09-2015: Leonie Marsmanden writes that there were some talks but that she is not and never was a jury member. She doesn’t know how and why she ended up on the list. Control refuses to explain this further.